The volume of content questioning the reliability of the Brazilian election system, asking for a military coup, and attacking democratic institutions, such as Brazil's Congress and TSE (Superior Electoral Court), rose sharply on social media in June 2022, months before the official presidential campaign started. That's the conclusion of an analysis by Radar Aos Fatos with data gathered between March 2021 and January 2023, when rioters destroyed buildings in Brasilia. Electronic voting. Even when confronted with fact-checking, users were questioning the electronic ballot box security and claimed that the 2022 elections were a fraud (Source: Twitter)

Coup attempt. A qualitative analysis of a random sample of 400 messages posted on Twitter and WhatsApp during the highest peak of anti-democratic content (Jun. 2022-Jan.2023) suggests that the sudden increase was not related to any specific event that took place in June but to the upcoming 2022 elections. Big tech. In a statement sent to Aos Fatos, WhatsApp said that it cooperates with authorities to protect the integrity of the electoral process and "it is important that inappropriate behaviors, besides offensive and possibly illegal contents, be reported to competent authorities."

Aos Fatos has also contacted Facebook, Twitter, and WhatsApp press offices. This text will be updated in the case of any responses.

Methodology. 'The data was collected by Radar Aos Fatos, an automated tool that uses a proprietary algorithm to estimate the probability of certain posts topics being "low quality."

When assessing attacks on democracy, this includes disinformation about the democratic process, messages with anti-democratic content (claims for the intervention of the Army, for example), besides attacks (threats or offenses) to personalities or institutions from the press or politics. The plan. Messages on WhatsApp claimed, without any evidence, that religious persecution, drug decriminalization, and "sexualization of children" would be some of the proposals of the new Lula administration. 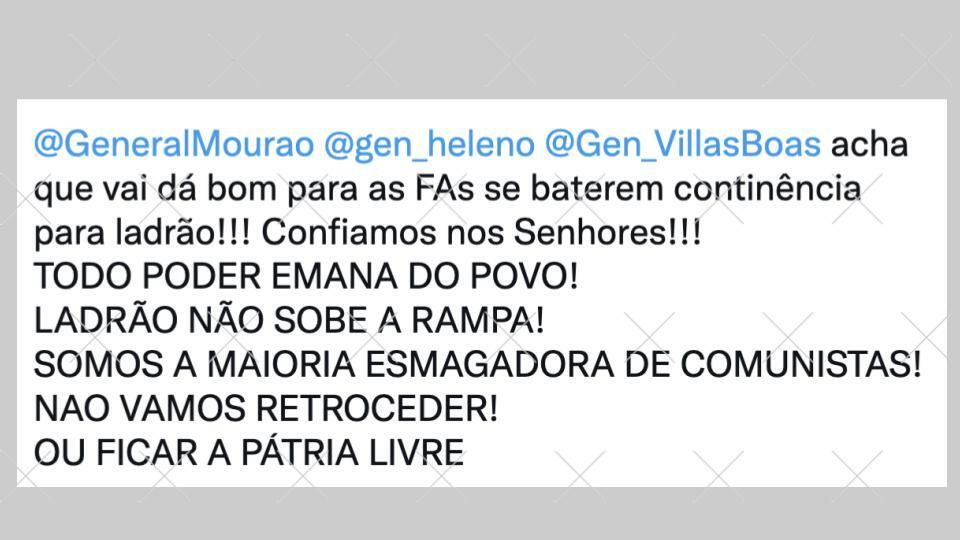 Coup attempt. A message shared on Twitter asks the Army to prevent Lula from taking office